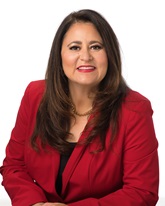 Chairwoman Lea Márquez Peterson was appointed to the Arizona Corporation Commission by Governor Doug Ducey in May of 2019. She is the first Latina to serve in a statewide seat in the state of Arizona.

Lea is proud to have won a four-way primary race for Congress in Arizona Congressional District 2 in 2018. Prior to her leadership at the Chamber, she previously served as the Executive Director for Greater Tucson Leadership (GTL) from 2005 to 2009 and owned and operated a Business Brokerage Firm from 2005 to 2009 and a chain of six gasoline stations / convenience stores with 50 employees from 1998 to 2005 in the Tucson region.

Lea has been appointed to serve on the Arizona Judicial Council which advises the Arizona Supreme Court and the Arizona Finance Authority, the state’s bonding authority. She chairs the Board of Directors of Carondelet’s St Mary’s and St Joseph’s Hospitals in Tucson and is the former Chair of the Pima Association of Governments’ Economic Vitality Committee. She serves on the Boards of the University of Arizona Foundation and the Pima County Workforce Investment Board and is the President of the National Association of Women Business Owners in Tucson. She also serves on the national Small Business Development Council advisory board for the U.S Small Business Administration.

She received her undergraduate degrees in Marketing and Entrepreneurship from the University of Arizona, and her Master of Business Administration from Pepperdine University. She resides in Tucson and is married with two children.