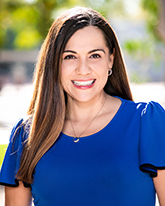 Anna Tovar and her husband have been married for over 20 years and have two wonderful sons. She is proud of her roots in Tolleson, Arizona, proud to be a product of the public school system and proud to have given back as a teacher, mentor and leader in her community.

Anna was a teacher for five years for the Tolleson Elementary School District, served on the Tolleson City Council for seven and a half years, and was Vice Mayor for two years until she joined the House of Representatives and served as Minority Whip. In 2013, she entered the Senate where she served as the District 19 representative advocating for Avondale, Tolleson, West Phoenix and the entire state.

While at the Senate, she served as the Senate Minority Leader, was Latino Caucus Chair, and served as a committee member of the Senate Judiciary, Senate Appropriations, Joint Legislative Budget Committee and the Joint Committee on Capital Review. As Senator Tovar, she developed a well-earned reputation as a legislator who fought for the dignity of underserved people.

Upon completing her time at the Senate, she went on to work as a Campaign Director for The Leukemia & Lymphoma Society. She raised funds to find a cure for cancer and to assist cancer patients. In 2011, she championed the effort to restore funding for nearly 100 patients on the bone marrow transplant list, saving many lives. As a two-time cancer survivor, Anna remains determined to find a cure.

Throughout her time at the state, she knew one day she would return to her hometown Tolleson to resume her service as a local elected official. In 2016, Anna was elected as Mayor of Tolleson, Arizona. She is the first female to hold this prestigious office.

During her time as Mayor, Anna has worked to ensure all citizens’ of Tolleson have an opportunity for a quality education and good paying jobs. She has supported local businesses and sustainable economic development as a principal cornerstone of her governance and focused on developing regional partnerships and collaborating with local and state elected officials to advocate for all residents.

In November 2020, Anna was elected to the Arizona Corporation Commission and is the first Latina to hold statewide office. She approaches this job with the same passion and energy as she has in every other endeavor.

Anna is working to restore transparency and integrity to the Corporation Commission. Before making any decision at the Commission, Anna will always ask herself: will it be good for my residents and the long-term future of our community?

Anna’s first priority is the consumer and she welcomes comment from the public. Please contact her office with thoughts, suggestions, and concerns.

Check here to sign up for Consumer Alerts from the Corporation Division. To receive alerts for your business register at eCorp.azcc.gov.Please call 602-542-3026 with questions for the Corporations Division.

Check here to sign up for Notices and Agendas for Commission Meetings, Hearings and Appearances.Please call 602-542-3931 with any questions.

Check here to receive the latest Commission News Releases and information. Please call 602-542-0728 with any questions.