REMOTELY FROM TUCSON – Arizona Corporation Commissioner Lea Márquez Peterson, in partnership with the national organization Hispanics in Energy, is hosting a second Hispanics in Energy forum on Wednesday, October 28, 2020, to focus on workforce diversity and development in the energy industry and public utility sector in Arizona.

The first forum, which focused on supplier diversity in Arizona’s energy industry, was held on Tuesday, September 29th, and included presentations from Arizona’s largest electric utilities, including APS, SRP, and TEP, as well as the U.S. Department of Energy, Chicanos por la Causa, and other organizations that serve the Latino community in Arizona.

Commissioner Lea Márquez Peterson, who is the first Latina to serve in public office in Arizona at a statewide level and is the former President and CEO of the Tucson Hispanic Chamber, said the Commission’s efforts to study inclusion, equality, and diversity within Arizona’s regulated utilities represents a major milestone in the Commission’s efforts to develop a more inclusive energy economy for the state.

“We want Arizona to be a place for people of all backgrounds to live and work,” said Márquez Peterson. “There are many economic opportunities in Arizona’s energy sector, which is a $15 billion industry and boasts over 20,000 jobs in our state.”

According to U.S. Census figures, Arizona’s Hispanic community is a third of the state’s population and is projected to grow at a rate of 12% over the next 5 years.

“The Hispanic population will be a large portion of the energy industry’s workforce of the future, which should reflect the diversity of our population,” said Márquez Peterson. “Additionally, Arizona is home to approximately 123,000 Hispanic-owned businesses, with a majority of those owned by Hispanic women. The ability to sell products and services to some of our largest companies in the energy sector is a great economic opportunity for Hispanic small businesses throughout the state.”

Commissioner Márquez Peterson sits on the National Association of Regulatory Utility Commissioners Subcommittee on Supplier and Workforce Diversity and is a member of the national organization Hispanics in Energy.

Commissioner Márquez Peterson hosted the first Hispanics in Energy Arizona Forum on September 29, focusing on supplier diversity. She is hosting a second forum on October 28, focusing on workforce diversity. Confirmed speakers include representatives from APS, SRP, TEP, the U.S. Department of Energy, University of Arizona, and Maricopa Community College.

Commissioner Márquez Peterson encourages all interested persons to attend the second Hispanics in Energy Arizona Forum on October 28 to learn how we can move forward on this effort together. 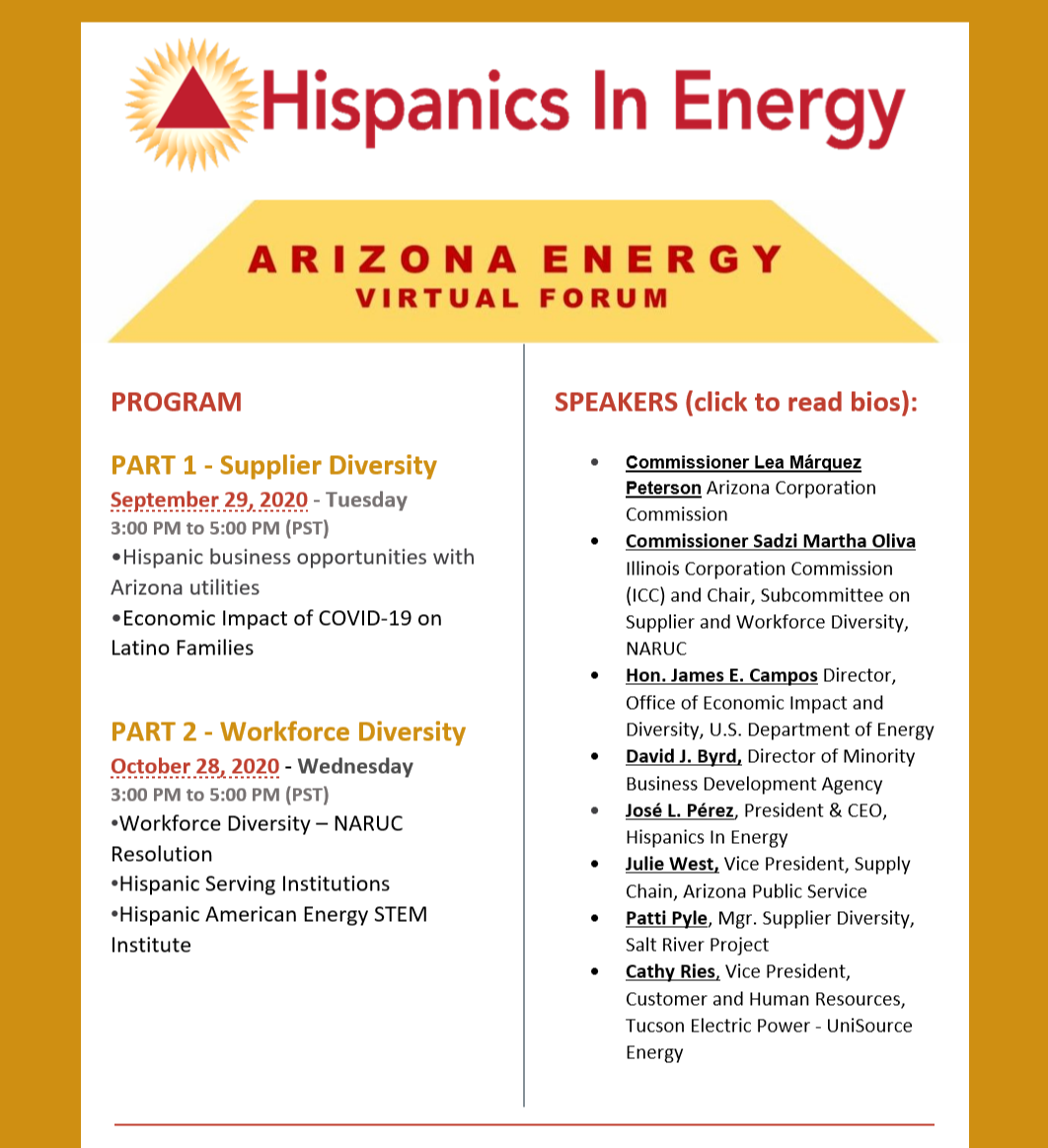 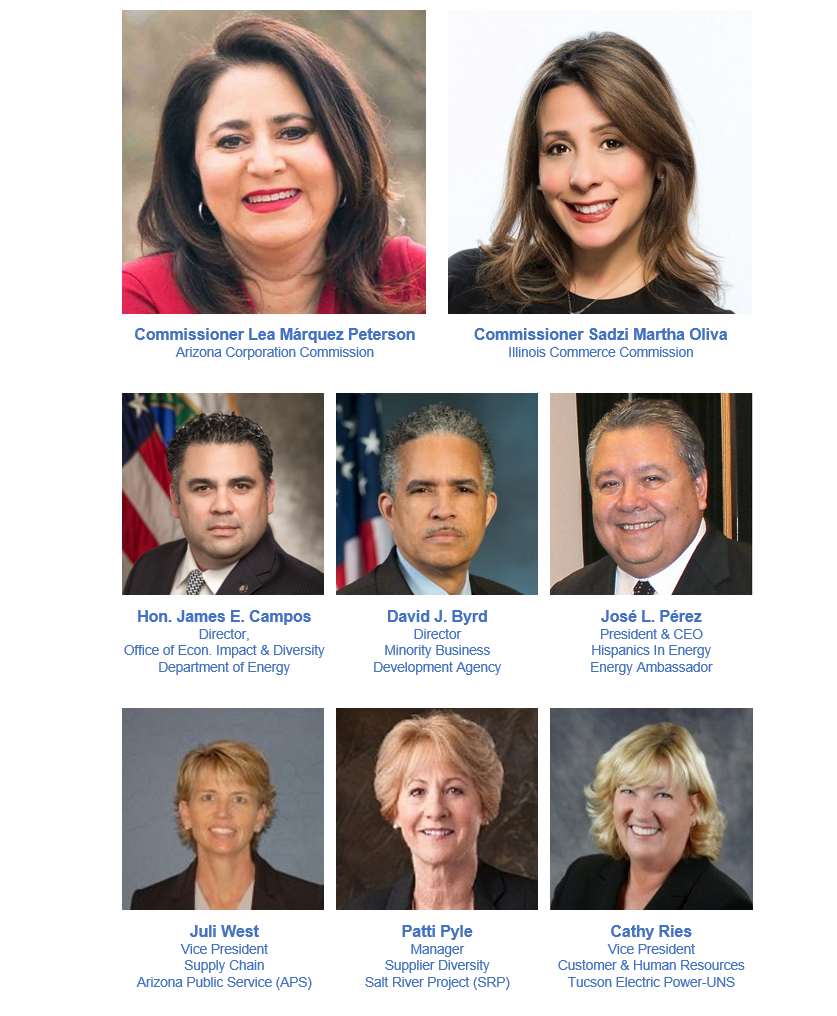 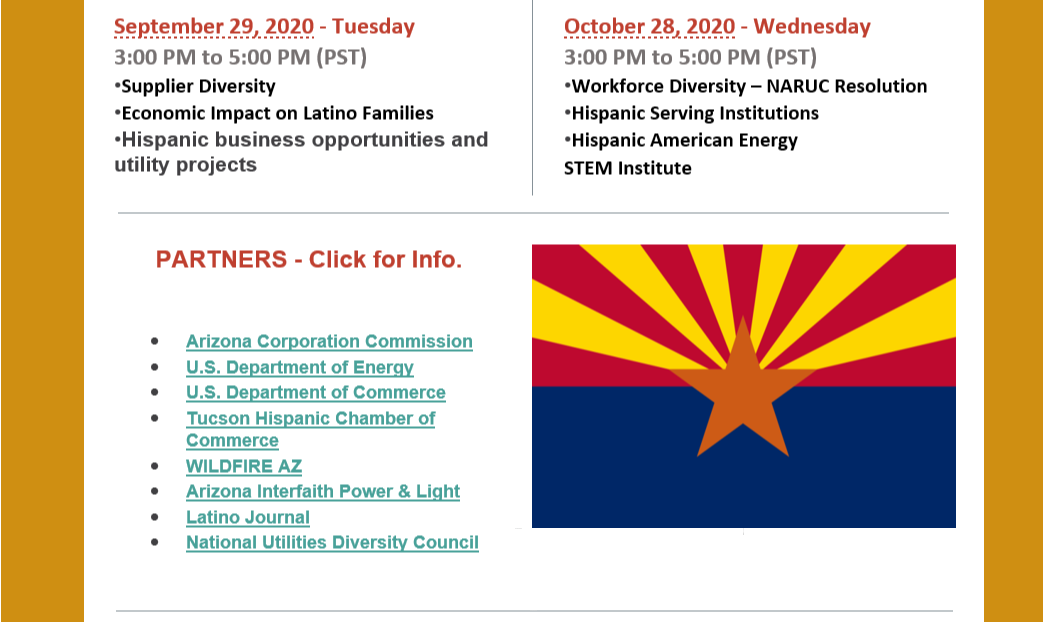 To view information regarding the second Hispanics in Energy Arizona Forum on October 28th, click here.

To RSVP for the second Hispanics in Energy Arizona Forum on October 28th, click here.

To view Commissioner Márquez Peterson’s letter to the Commission in support of supplier and workforce diversity, click here.

To watch a video of the first Hispanics in Energy Arizona Forum held on September 29th, click here.

Commissioner Lea Márquez Peterson was appointed to the Arizona Corporation Commission by Governor Doug Ducey in May of 2019. She is the first Latina to serve in a statewide seat in the state of Arizona.

Lea is proud to have won a four-way primary race for Congress in Arizona Congressional District 2 in 2018. Prior to her leadership at the Chamber, she previously served as the Executive Director for Greater Tucson Leadership (GTL) from 2005 to 2009 and owned and operated a Business Brokerage Firm from 2005 to 2009 and a chain of six gasoline stations / convenience stores with 50 employees from 1998 to 2005 in the Tucson region.

Lea has been appointed to serve on the Arizona Judicial Council which advises the Arizona Supreme Court and the Arizona Finance Authority, the state’s bonding authority. She chairs the Board of Directors of Carondelet’s St Mary’s and St Joseph’s Hospitals in Tucson and is the former Chair of the Pima Association of Governments’ Economic Vitality Committee. She serves on the Boards of the University of Arizona Foundation and the Pima County Workforce Investment Board and is the President of the National Association of Women Business Owners in Tucson. She also serves on the national Small Business Development Council advisory board for the U.S Small Business Administration.

She received her undergraduate degrees in Marketing and Entrepreneurship from the University of Arizona, and her Master of Business Administration from Pepperdine University. She resides in Tucson and is married with two children.